On May 20th, the second in a series of three ACCT Let’s talk… webinars took place with the purpose of Advancing Continence Care Together from a holistic perspective. With the contribution of Professor Anne Cameron, Dr. Ilan Koppen and Mrs Roberta Motta, renown lecturers and specialists, this second webinar looked at bladder and bowel management with a society focus. Here we share some highlights from the webinar, which you can also watch on-demand, using the link below. If you enjoyed Let’s Talk Society, make sure you don’t miss the next webinar Let’s Talk Self on June 17th! 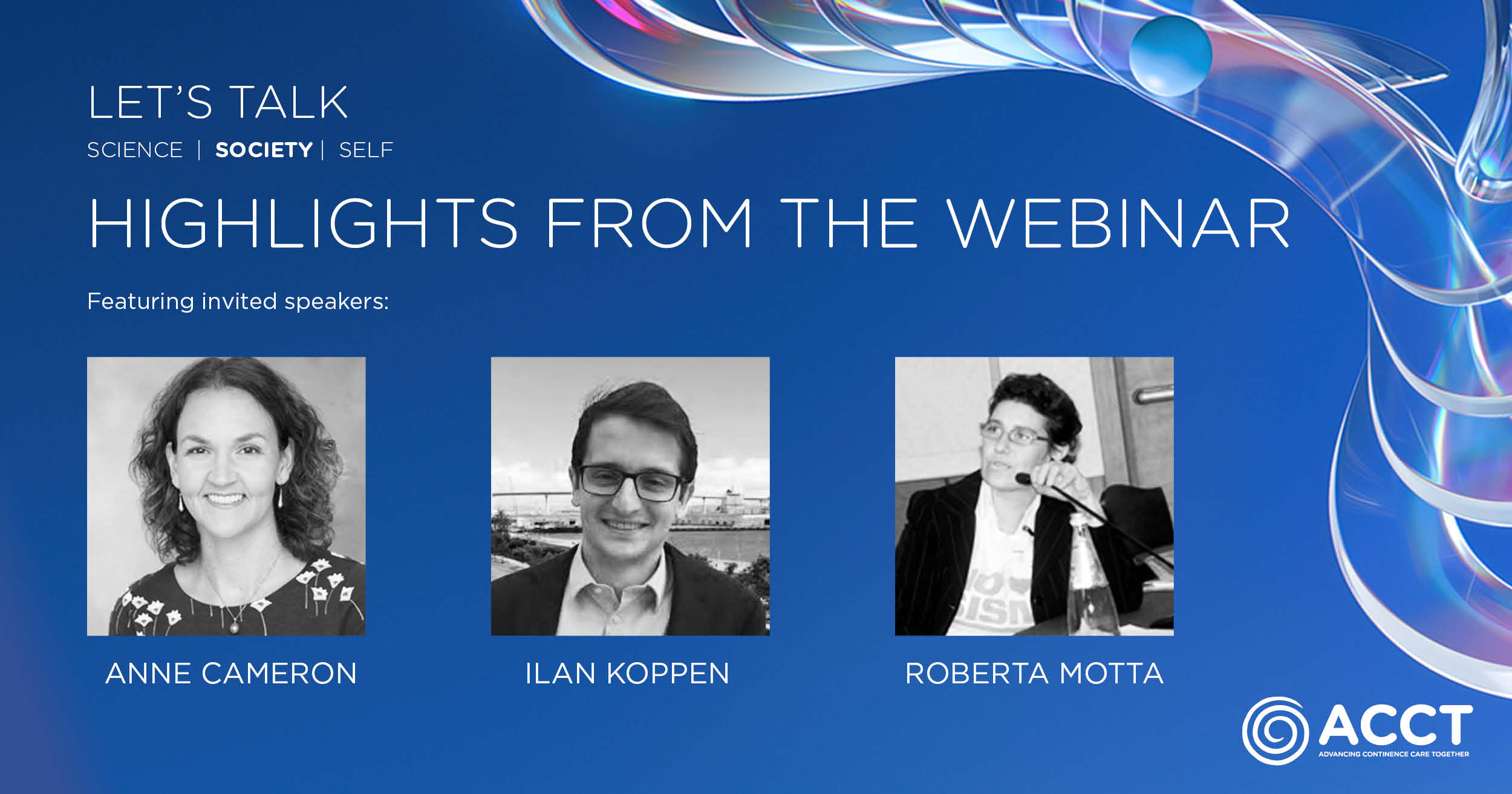 Professor Anne Cameron opened her speech by declaring that neurogenic lower urinary tract dysfunction and IC, as well as neurogenic bowel dysfunction and TAI, are areas where we have made substantial changes and advancements when it comes to modern treatment. “Worth it” is something we normally associate with cost, but Professor Cameron brought this up from a patient’s point of view instead. Intermittent catheterization (IC) developed quickly during a ten-year period and the rapid adoption of this technique was due to its very clear advantages. The urological complications of IC are substantially lower compared to using indwelling catheters – the risk of UTIs about 6 times lower and the risk of bladder stones 20 times lower. Professor Cameron described in detail the interaction between the patient, the providers and the payers and declared that obviously many people adapt hydrophilic catheters because of reduced risk of UTIs, but that’s not the whole story. These catheters are also known to be associated with less pain, microhematuria and increased ease of use. On top of this, it turns out they are cost effective, as they are supported by the patient, the healthcare providers, and the payers.

Professor Cameron continued her talk by bridging to bowel dysfunction and transanal irrigation (TAI). This is a rather new therapy and covers only 50 papers, all rather recent. She described the gradual development of TAI and the recent progress with Navina Classic and Navina Smart, which also tracks the patient’s irrigation settings in a smartphone app, totally in line with the progress of today’s medical technology. Some of the things that have driven the technology forward is improved quality of life for constipated patients compared to routine care, as well as reduced UTIs and costs for healthcare. So far, the adherence to the therapy is however only 50 %. To share with friends and family that you are using TAI as if it were a cool technology is not quite happening. There are also insurance and regulatory limitations which make TAI difficult to prescribe. It also requires multiple learning sessions and a lot of support, something that has been particularly difficult during the pandemic. It’s great technology, it works very well, it’s safe, but it still hasn’t reached the tipping point in the same manner as hydrophilic urinary catheters. It’s been a challenge to implement, but again, it’s worth it for our patients.

Dr. Ilan Koppen continued with describing an important patient group, children, and how – when they are affected by bladder or bowel dysfunction – it does not only affect their lives but their future, as well as the lives of the whole family. Children with bladder and bowel dysfunction often have problems in school, such as absenteeism that in the long run affect the child’s future education. To parents, it causes a feeling of helplessness, anxiety and depression, but could also create work-related issues. The overall impact of a child’s bladder or bowel dysfunction is major and is difficult to quantify – and the visible healthcare costs are usually just the tip of an iceberg. Most cost studies look at direct costs linked to treatments and healthcare visits, but the major costs for society can just as well be the indirect costs related to the consequences from school and work absence, social and emotional functioning. Unfortunately, time does not seem to heal these health issues, as some pediatric patients become adult patients as well.

Mrs Roberta Motta has worked during the last twenty years to implement an interdisciplinary approach to bladder and bowel management. She has learnt that it requires certain skills to succeed and highlighted the importance of having knowledge of the specific pathology, share the same language and be clear about the role of each professional. As an example, she mentioned the existence of conflict of interest between different therapeutic principles. Roberta considered it important that nurses are familiar with and utilizes the terminology described by International Continence Society (ICS).

One important method that Mrs Motta uses in her examinations are Post Void Residual (PVR). This is used to evaluate that there is no residual urine remaining in the bladder after urination. She declared the results from a recent study in 501 individuals with MS showed that the vast majority suffered from symptoms related to both storage and voiding. These clinical manifestations impact patients’ quality of life, as problems related to micturition impede many people with MS from fully participating with family, friends, and the community. Mrs Motta ended her talk with interesting reflections on how she thinks bladder and bowel needs can be treated together.

Did you miss this webinar or the first in the series? They are both available on-demand on our webinar page, which you can access here:

Want to register for our next event Let’s Talk Self?